The electrons are always the particle, and the existence probability just follows the wave. The thought is natural. However, the interpretation is not correct. Aspect experiment disproved the interpretation in 1982. An electron is spreading like a wave before we observe it.

This wave function collapse is a very strange phenomenon. For example, I will partition the box into two rooms. Then, a wave of an electron exists in each room. If you look in one room, there may be an electronic, or not. 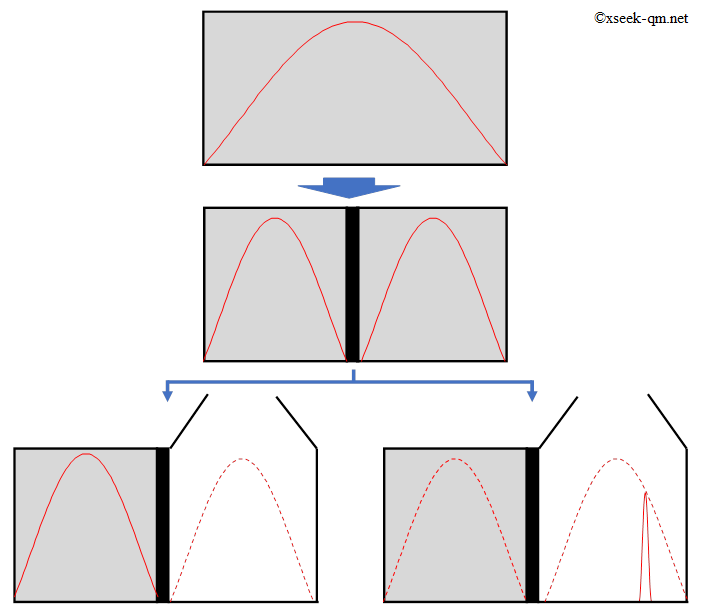 I touched many-worlds interpretation for the first time in the book "The fate of the universe" of Richard Morris. I have read it when I was about 10 years old. I would like to quote from the book. (I do not have an English version, so it is translated from the Japanese version.)

However, consider the universe is divided into two when a probabilistic event occurs as if science fiction writers say. Many universes exist if it is true. Many kinds of universe we can imagine exist like a little different universe or a big different universe.

Such story is very interesting. The reader may think there is no scientific theory that allows this kind of idea. However, it exists in fact. It is called "many-worlds interpretation" in quantum mechanics. Physicist Hugh Everett III wrote it in his doctoral thesis of Princeton University in 1957 in the United States.

It would seem that such a fantastic idea would be easy to disprove. However, this is not the case; Everett's theory is mathematically identical to the standard version of quantum mechanics. This means that it is not possible to devise an experiment that could distinguish between the two.

At first, I thought that the idea was not probable when I read this book. However, I have got to think that it might be right when I was in university.

It was an opportunity to change my mind to have known "Kaon mixing" in the lecture of "CP violation." The wave function of superposition Kaon and Antikaon appears in the "Kaon mixing."

In order to understand the superposition of two kinds of particle those are obviously different, the idea like many-worlds interpretation is much effective.

I have got to think that many-worlds interpretation might be right by the trigger.

"I wonder the reason is that the interpretation that allows the parallel world is suspicious idea."